skip to main | skip to sidebar

The topic for the HAL meeting this evening was "filters", which is a pretty big topic! After all, we have filters for visual use vs. imaging use, and then filters for specific targets from faint DSO to our brilliant Sun. Hopefully I provided a little insight at the session based on my personal experiences, especially as to planetary observing.

Back in '65 when I got my first scope, a classic 60mm refractor with .965" high-powered eyepiece, I knew one thing for sure that I really wanted to see was Jupiter's Great Red Spot. The scope showed the planet as a fuzzy disk with slight rainbow fringe, perhaps a stripe or two upon it, but no GRS in sight on the multiple occasions I target the giant planet. Somewhere - probably a library book that I had borrowed - I read how a blue filter would darken the GRS and therefore make it stand out better. Clearly that would make my target materialize in the eyepiece!

My dad was a local pharmacist and contracted with a camera shop down on Falls Road to provide film developing service for his customers. He was supportive of my hobby (so long as I didn't get the foolish idea that I could make a living looking at stars) and helped me to get a 2x2"Wratten 80A blue gelatin sheet and a mounting ring for the filter that was just a little smaller than the internal diameter of the refractor's dew shield. I carefully cut out my circle of blue, mounted it in the holder, dropped it into the front end of the scope and then waited for the next clear night.

The view of Jupiter was quite pretty with its blue hue, but even after several attempts on different nights I still could see no GRS. (Of course, I am assuming that just by the odds I would have seen it on one of those evenings. I had not discovered Sky & Telescope with its listing of GRS transits yet, and online lookup would have been the glorious stuff of science fiction in the mid-60s). While filters lost a little of their charm from the experience, I felt that the principle was certainly sound. Reddish features would have their light blocked by a complementary blue filter, making them darker and easier to see. I began to suspect (correctly) that it was more an issue of small aperture than filter failure. 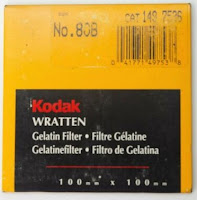 When I graduated to my 6" Newtonian I was finally able to catch sight of the Great Red Spot one evening without a filter. It had fairly good intensity back in the late 60's - similar to its appearance now. The availability of a glass filter that would screw into the bottom of the eyepiece was (as far as I knew) nonexistent. So no filters for visual inspection of my planetary quarry at that point in time.

But by now I was starting to play with using a second-hand Minolta range-finder camera to take pictures using the afocal method. Talk about a tedious hit or miss approach! You had to line up the camera over the eyepiece at where you think you are at focus, then hopefully get the planet in the field just based on the 6x30 finder scope, and finally snap the picture with a cable release while hopefully not jiggling the scope. Despite all that, I had occasional success with the technique. It also drove me to learn how to do my own B&W development rather than watch the photo lab assume nothing was on the roll of film and slice right through my field when trimming the negatives.

By this point I'm a HS freshman, networking with fellow amateurs at the Baltimore Astronomical Society and with enough pocket money from working at the pharmacy to buy some hobby stuff. I got another filter holder that would attach to the front of the Minolta and outfitted it with a Wratten blue gelatin. And then on a May evening in 1970 I did it - I actually captured the GRS photographically, a dark spot near the planet's central meridian. It was an OMG!! moment as I inspected that roll of film while hanging it up to dry.

It was probably shortly after this that I began to find retailers of glass Wratten filters that we are so familiar with today. I started my collection with a #80A blue and it gradually expanded like a rainbow. Over the years I have found that, for visual planetary observing, they are not going the wow you like an O-III filter can do on an emission nebula. But they can be helpful if you approach their potential realistically, i.e., a tool that can improve the contrast of notoriously low-contrast planetary features. In addition, they do not cost an arm and a leg (at least not for the basic Wratten glass filters that almost any good astronomical supply house will carry).

Although I am given over more to imaging a planet rather than sketching it these days, I still do enjoy at the end of the session taking a few minutes to gaze upon my target before putting away the equipment. In doing so I'll almost always apply a filter in an effort to see the most that I can. Here are my common go-to filters using my 10" reflector (if you have a smaller scope then a corresponding filter with higher transmission rate may be a better fit):

The brilliance of our sister planet Venus means you have to knock down the glare significantly to be able to appreciate the disk. I often use a #47 Violet with only 13% transmission to accomplish that. The most I have been able to make out on Venus is some brightening at one or both polar regions ("cusp caps").

When Mars comes calling every other year it is a fun target and arguably one of the best for filter enhancement. The #80A medium blue is helpful in seeing the polar ice caps and lighter orthographic clouds that sometimes form. A light red #23A helps to darken the albedo features and boost their contrast. I have also found a deep yellow #15 to be a nice choice to reduce the planet's brightness and boost overall contrast.

Jupiter is an absolute favorite for me given how dynamic it is. I have always found a yellow filter (#15 deep yellow or #11 yellow) as a good, all purpose aid to improving the contrast of the belts against the lighter zones. A pale blue (#82A) or medium blue (#80A) are helpful as well, especially with the Great Red Spot (the pale blue improves the contrast yet you can still pick out some of the red overtones to it).

While not as subtle as features among Venusian cloud tops, Saturn offers delicate features with its gradually darkening belts as you move from bright equatorial zone to dark polar hexagon. Again, a yellow filter seems to work well for improving the contrast a bit on the globe.

Based on a very interesting "consumer reports" article on Cloudy Nights where author William A. Paolini compared multiple filters to find the ones that seemed to be the best for accentuating planetary detail, I have recently purchased a Baader Contrast-Booster filter. Now I just need to wait for this fall when we'll have Mars, Jupiter, and Saturn available for my own assessment of how well it does.

If planetary observation is something you enjoy then you really should play around with some filters to see if they help you pick out some of the subtler details. Most retailers offer the Wratten color filters for under $20, and so long as you are not expecting miracles to happen, you'll likely find them an interesting and enjoyable accessory to have in your observing armamentarium.