skip to main | skip to sidebar

Like most enthusiastic amateur astronomers I have a long list of gadgets and upgrades I'd like to acquire. But until I hit the lottery I have to prioritize these things. High on the list has been to replace my nearly ten years old planetary video camera. An ImagingSource DFK21AU042 color camera, it has served well and still can acquire good images of the brighter planets. But with a maximum frames per second (fps) of 60 (and 30 for dimmer Saturn), I feel the need for speed.

Based on what I've seen posting images to the ALPO gallery as well as some Internet research, I concluded that a ZWO camera would be a reasonable brand to go with. Another relatively easy decision was to get a color camera again. A monochrome, using R-B-G filters to create a final image, certainly offers better results, but it significantly increases the amount of time to acquire and process the files. And of course there is the several hundred dollars of investment in a filter wheel and those filters. I need to keep it a bit simpler, at least for now.

My other two primary criteria were a smaller pixel size and the ability to achieve a fps rate above 60. Fortunately ZWO does offer a nice comparison grid to see the differences among their many products. I finally settled on the ASI178MC with its 2.4µm pixel size (less than half the size in my existing camera) and potential fps greater than 100. I tried initially to order from distributors in the US but everyone was back-ordered, whereas ordering from ZWO directly I had my camera in about a week.

The first clear night (surprisingly I did not get the month of clouds curse that often accompanies new equipment purchases) I targeted Jupiter and Saturn with the Cyrus 10" reflector and the ASI178. FireCapture immediately recognized the camera, but I was stymied in getting the frame rate to exceed 60 fps, even with cropping the region of interest (ROI). But even so I was happy to see I could image Saturn at that rate which my old camera never achieved.

A little more research provided some insight as to what might have been blocking the higher frame rates. The camera can run in either 14 bit or 11 bit color modes. The smaller color palette of the 11 bit allows a higher rate - but there was no way (that I could find at least) to specify the bit level using FireCapture. I downloaded the free ZWO interface, ASICap, and readied my laptop to use it the next clear evening.

The ASICap did the trick. As soon as I switched to 11 bit mode the frame rates could be boosted significantly, up to 150 fps on Jupiter with a tightly cropped ROI. With a faster speed there is a greater chance of catching more of those milliseconds long windows of stable seeing, hopefully leading to more sharp images in the sample. Of course seeing has a lot to do with the outcome regardless of fps, and so far I've not had a really good night of steady skies.

One unforeseen (but predictable) consequence of the higher frame rate is the much larger video file that is produced. Previously a 2 minute run on Jupiter yielded about a 2-3 GB AVI file, but now I am producing files that hit 7-9 GB in size. This then leads to a storage issue with no really great solution (at least not suitable economically). I will probably fill up my 2nd TB of online storage by October, so I will have to come up with a plan. Right now I am thinking of starting to rate the video captures in terms of quality and interest with an eye to discarding those below a certain rank (contrary to my planetary video hoarding tendency).

One unexpected benefit with using the ASI178 is the much larger field one can start at, making it much easier to find the target, center it, and only then reduce your ROI to have it fill most of the frame.

In terms of the ASICap interface, while it is workable I still prefer FireCapture. For one thing I like having the ability to briefly pause the capture and nudge my target back into the field if it has drifted out. I also find the more prominent display of the metrics during capture (fps, elapsed time, file size) much easier than the small font at the bottom of the ASICap screen. I also like that everything of importance fits on the FireCapture screen whereas I find myself scrolling a good deal in ASICap.

Hopefully an evening with some steady seeing will present itself soon so that I can get a true sense of what the camera can achieve. In the meantime, as often happens when I have new equipment, I plan on spending some time searching CloudyNights and YouTube for tips and advice from my fellow planetary imagers.

What is it that causes someone to undertake astronomy as a hobby? I certainly believe that one of the primary drivers is the majesty of the night sky - especially when unencumbered by light pollution. It is a visceral awe that arises from your soul when you behold a sky that is ablaze with stars.

Another incentive is the invitation to ponder the fantastic. We learn of things such as suns collapsed down to neutrons where a pea-sized portion of it would be measured in tons, and we contemplate storms on other planets lasting centuries.

Yet a third enticement is the thought that one might contribute to that body of knowledge. In bygone decades the discovery of a comet was the goal of many a dedicated amateur observer. Others have fastidiously and relentless made magnitude estimates of variable stars, or timed the central meridian crossing of Jovian features. But then the automatons arrived, tireless robotic scopes and orbiting observatories capable of being the eyes on the universe in a way amateurs cannot match.

The perceived loss of relevance is certainly real. Witness the genuine excitement of our community at the prospect of providing exo-planet transit timings to help scientist improve their knowledge about these distant worlds. I fully expect companies like Celestron to soon begin marketing tools to help those who wish to participate in this work.

Planetary observing has been an astronomical passion since my first “real” telescope that enabled me to see features. I started by sketching Jupiter, Saturn, Mars, and Venus to submit to the Association of Lunar and Planetary Observers (ALPO). More recently I’ve taken up imaging as it yields results that are far superior to my aging eyes and artistic talent.

After so many years of just being an ALPO member, I decided last year to volunteer as the coordinator who posts images and sketches from observers across the globe to the ALPO gallery. Twice this week, in email exchanges with individuals who contribute their work to the gallery, I encountered the sense of inadequacy. “It is impossible to keep up with the big guns,” was the lament from one. It can be deflating when comparing one's work to the astounding images produced by amateurs equipped with larger scopes, deeper pockets, and a firm dedication to their craft. Indeed, why bother to capture an image when you know there are others whose work is consistently an order of magnitude better than what you can achieve?

First, I’d argue that self-improvement is never a wasted effort! As you become more familiar with the equipment and software your end result will look better and better. This, in turn, is likely to encourage you to buy that next piece of equipment or program that can push your current boundaries of expertise. You may never reproduce the results of someone like Damien Peach, but that is true with any hobby – from needlepoint to swimming there are dedicated “amateurs” who will always be the ones we strive to emulate.

Secondly, you’ll never know when it will in fact be you who witnesses a rare event. It happened to Ethan Chappel two years ago as he was carrying out “lucky imaging” of Jupiter when he recorded a momentary bright flash that turned out to be a boulder-sized meteor striking the planet. He was the only person to capture the event which helps scientists to calculate the frequency of such impacts at Jupiter. If it happened to Ethan (and others over the last decade), it could certainly be you the next time.

A final motivation is that your observation is likely unique. The top gun amateurs are not out there 24x7 capturing video of the major planets. Your photo or sketch can be very useful in determining the drift in longitude of a Jovian cloud feature, pinpointing when and where that Martian dust storm originated, or refining a brightness estimate of an inbound comet. Advancing science is often achieved through many data points – be one of them! 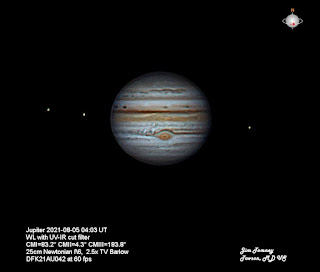 Yes, the professionals and leading amateurs have the equipment and resources to provide us with stunning planetary images. But that should not be any reason to rule out the citizen scientist role you can play by persistently going out and reporting on what you see to organizations like ALPO. Keep refining your skills and keep looking up – who knows what opportunity for discovery you might encounter?